written by Veg Recipes With Vaishali May 7, 2022 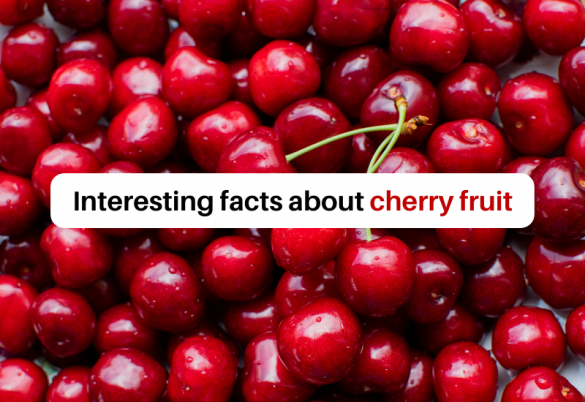 Cherry fruit is one of the most delicious fruit. Despite being delicious; it also has many health benefits. Also, it includes vitamin K, vitamin A, and vitamin C which makes it much healthier to eat. It also brings many antioxidants which are good for kidney and liver health. People suffering from chronic diseases are advise to eat cherries. As it protects the human body against this kind of disease. Now, let’s look at some of the interesting facts about cherry fruit.

The harvesting period of a plant of cherry can be just seven seconds.

Yes, this is true. In today’s time, laborious processes have been update to the tree shaking method using machines. So, this power has a price. Thus, by machine, it has become easier to harvest the cherry.

Cherry is of two kinds: sour and sweetish

You can have either a sweet or sour taste by eating cherry. Cherries with having sweet taste are consume as a snack item. While the cherries having a sour taste often aid in the baking process. As tart cherries have much more firmness than cherries with a sweet taste in affixing their structure. Also, tartness makes it easy for bakers to control the sweetish taste level in the baking process.
Montmorency is a very popular and easily accessible type of sour cherry. while Bing is the most popular kind of sweetish cherry.

Michigan is popular for the wide cherry growing business it has. It has almost 30,000 acres of the cherry tree farm. It produces numerous sour cherries every year. Also, this City celebrates the yearly National Cherry Festival as an unceremonious function. Now; it has become a ceremony that many people attend throughout the globe.

Tart cherries are best grown in the Midwest

Door County was one of the topmost producers of cherries in the early 1950s. Its production ranges from 1 million trees of cherry. But, today Door County holds just 2,500 acres of the plantation. But it is a good number and thus, people of this town have pride in their cherries. It is still best known for the growth of cherries with a sour taste.

Besides all these in interesting facts about cherry fruit has many health benefits too. They are low-calorie fruits that are good for human health. Cherries are also pack with many important antioxidants which again makes them beneficial for the health.

In the 1600s there were several varieties of cherry fruits in North America. It included choke cherries and black cherries. One of the interesting facts about cherry fruit is that it was also used in the making of alcohol and rum in earlier days. They were use as raw materials in the formation of alcoholic drinks.

In the early 1950s the U.S. was the leading producer of cherry fruit. But as time changes, things change. Today, Turkey holds the record of being a mass-productive city of cherry fruit. It produces 5,35,000 tons of cherries annually; which is a very good range of its production. Also, Turkey’s fertile climate is very suitable for the growth of cherry fruit.

The term cherry originated from a Greek town named Cerasus. Now, this city is situate in Turkey. It is the location where cherries were sold for the first time in Europe. But, that’s not fully true. This city on its own was given the name by cherries. And also, it is known that it’s an Akkadian origin word.

Luxardo Cherry:- A tough past

These were the initial cherries named Marasca cherry. This was use as a raw material for liqueur production. Cherries were mix with many other fruit juices and then liqueur was prepare. Thus, for this reason, Maraschino Cherry became popular in the early 19th century. But, soon they were cutting corners because cherries were not plentiful enough to fulfill the demand of producers. Thus, this sudden low in cherries production laid to its complicated history.

Whenever there is the growth of cherry fruit; alongside there is also the growth of white flowers. This happens during spring. Flowers that are grown are arranged in clusters. And pollination is done by insects.

According to botany cherries belong to the drupe (i.e. stone fruit). It has skin near to blackish color. Its seed is located in the center of the fruit. Its skin is very smooth in texture. Around 7,000 cherries are produce by this tree per year.

Almonds, plums, peaches, and apricots have the same genus as cherries. Also, these plants are similar to pears, hawthorns, and apples. These all fruits resemble the rose species of plants. And all these belong to small unbroken roses.

According to a study it is prove that cherry helps in fighting cancer. The antioxidant compounds contained in tart cherries help the human body to fight against cancers. Cancer-causing cells are reduce through cherries.

Cherries are not only delicious but also have many health benefits making eat good to eat. Thus, one must include cherries in his/her diet. It can also be serve as a topping in many dairy products. Also, its sweet taste makes it very tasty to eat.
So, these were some of the interesting facts about cherry fruit you must know.