Intake of Niacin (Vitamin B3) Every Day – It’s Pros & Cons 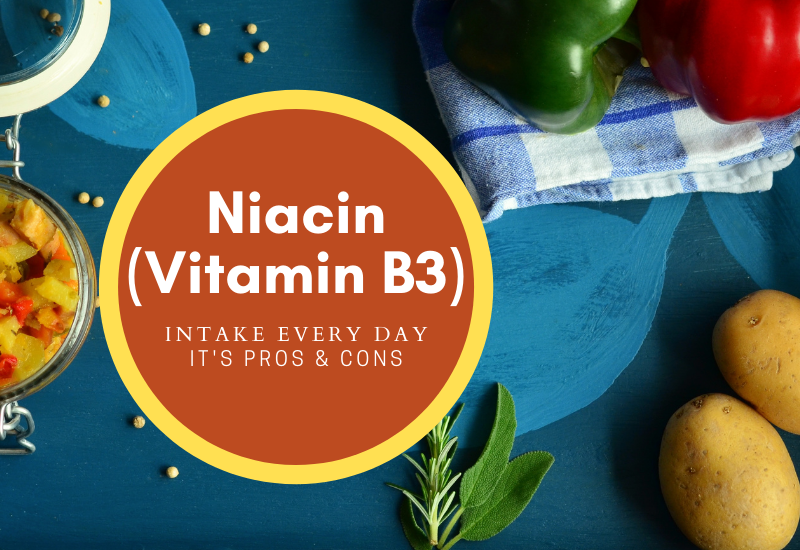 Niacin (vitamin b3) is a micronutrient that has to be taken every day. Though it is a Vitamin B unlike thiamine and riboflavin, it can’t be stored in our body, as we have to take it every day. It will be disposed of in urine whenever there is some excess amount of it. It can’t be produced by our bodies.

So, let’s have a look what are all the common foods that are found to have proper Niacin (vitamin b3) in our body.

It is the best natural source for Niacin (vitamin b3) , as you can choose either chicken or beef liver to have in your meal. Both are quite equal in the cost may be a little different.

If in case you are a person who loves to eat fish instead of meat, then tuna is the best option for that. It is the best source for Niacin (vitamin b3) , as it contains selenium, omega 3 fatty acids, b6 vitamins.

It is high in protein, where a 165 gram of niacin consists of 21.9 mcg of niacin. But it is advisable to have tuna once a week because of it’s the ability to get reacted with metal and may form mercury toxicity.

It is also a fish, like a tuna, high in Niacin (vitamin b3) . Of course, it too has high omega 3 fatty acids and protein, which reduces oxidative stress. It improves the eye strength, whereas an 85 gram of cooked salmon contains 53% of rda for men and 61% of rda for women

*if you need to intake Niacin (vitamin b3) with less amount of preparation while compared to these and to gain more of it. Then you can go for the below stated one.

These are also fish types and are small, which is the best snack for niacin production. Every fish have omega 3 fatty acids by nature, even this one as well.

A piece of anchovy provides 5% rda for both men and women. Just 10 pieces of it will meet your daily need of Niacin (vitamin b3) , it’s inexpensive as well.

Lean pork chops are the best sources of Niacin (vitamin b3) . It boosts your metabolism and gives energy that long lasts for hours. Its taste has a separate base, where roasted pork of 85 grams contains 6.3 mg of niacin.

*ground beef is also a good source of Niacin (vitamin b3) where 85 grams of ground beef has 6.2 mg of niacin.

Well, the foods i suggested above are the only ones which we will take once a week or twice, but for daily purposes, i can suggest you a perfect snack for that.

Peanuts are best in niacin under the vegetarian category. You can have peanuts every day during breakfast like peanut butter along with bread and even as a crunchy snack during evening times.

It is rich in protein, monounsaturated fats, vitamin e, vitamin b6, magnesium, phosphorus, and manganese where 2 tablespoons of peanuts contain 4.3mg of Niacin (vitamin b3) .

If you are a person who loves to have more rice during lunch, you can go for brown rice. Which provides a good amount of Niacin (vitamin b3) along with carbs as well.

While compared to white rice, brown rice helps to reduce inflammation, increases heart health, and reduces obesity as well. A normal bowl of brown rice gives 18% of rda for men and 21% of rda for women.

Wheat products like wheat bread and pasta are also a good source of niacin. That’s because the niacin-rich outer layer of wheat kernels known as the bran is included in whole-wheat flour.

It is the best suggestion for breakfast for those who intended to reduce weight and maintain. The energy at the same level, but whatever amount of Niacin it carries, only 30% of it was digested breakfast food and absorbed.

Here is another snack that provides 2.5 mg of niacin per cup. Where almost all the vegans love to taste mushrooms in the form of soup, snacks, and curry as well. It also provides vitamin d, which has been already mentioned in the article about vitamin d. It raised the immune power of the adults as well.

Potatoes are also rich in niacin and a common vegetable added in our daily curry or meal. One large baked potato provides 4.2 mg of niacin, and it is advisable to have it in limited amounts, as once or twice a week.

As I mentioned earlier, Niacin or vitamin b3. It is an essential nutrient, which you must consume through your diet, as your body can’t synthesize or store it.

Among other things, niacin aids (Vitamin b3) your metabolism and nervous system. So it’s a duty to add niacin to our everyday food list at least as a snack, just find whatever you like and enjoy the food.